Walking the walk: How and why we made Tuneup

Our first lead generation tool is a single page app written in Elm, hosted on Netlify

We recently released Tuneup, a tool we designed to help B2B software companies think critically about their packaging and pricing. We’ve written a post introducing the tool, and designer Steve Berry from Thought Merchants wrote about it from his perspective, but we wanted to cover two more things in this post: how and why we built it. 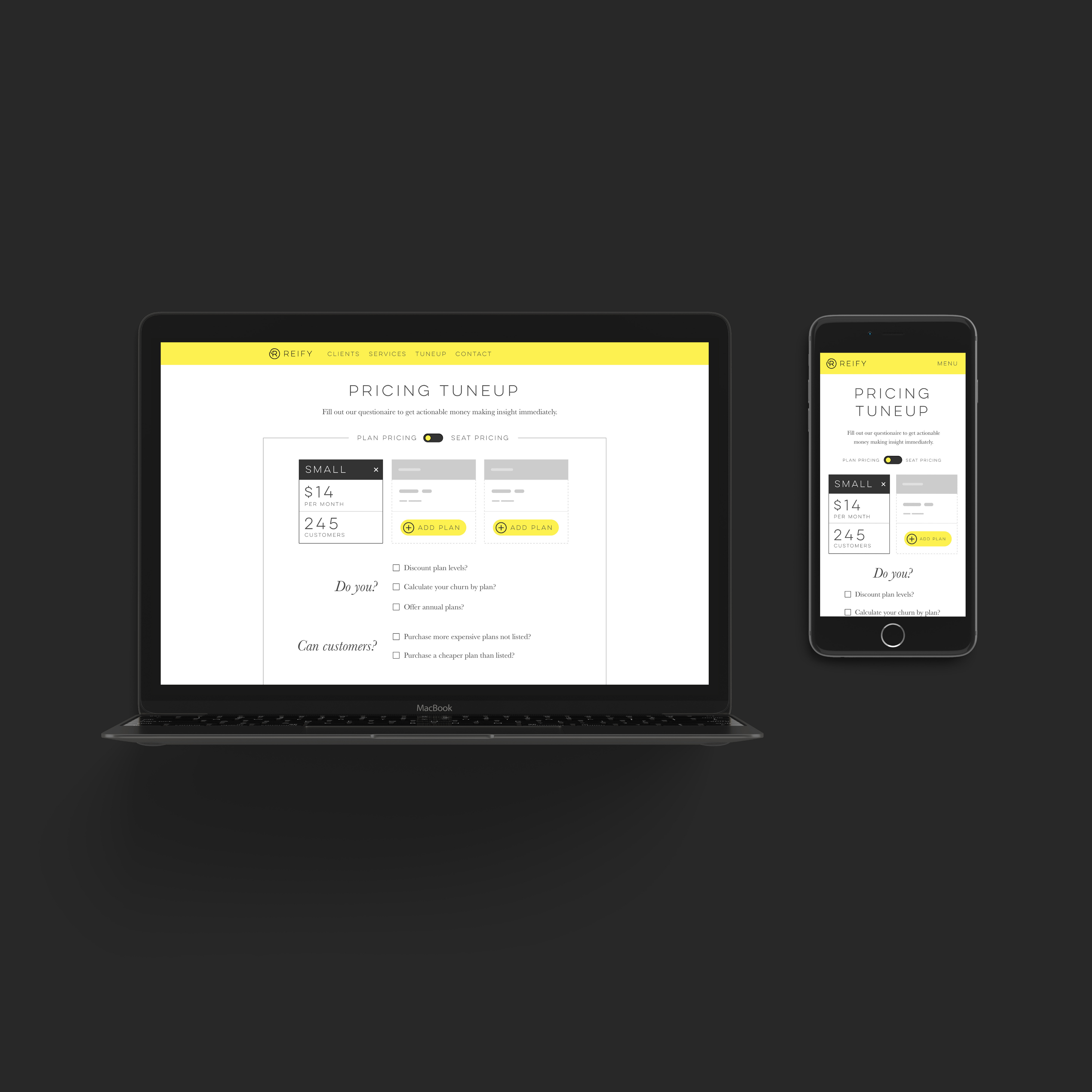 Image courtesy of Thought Merchants, our designer for Tuneup

How we built Tuneup

Tuneup started its life as a much grander, more complicated idea that has since been broken up into many, many smaller parts. That’s one of the best things about working with a great designer — they’ll tell you when you’re trying to do too much.

From the beginning, we knew we wanted to build something that would meet a few technical qualifications:

Here’s the technology we ended up using to meet all of these requirements:

Netlify — Netlify is a platform for developing and delivering web applications, like a static site hosting system with lots of bells and whistles. You add a project to Netlify, configure it to build your application when you git push, and it handles hosting and everything else. One way that Netlify particularly shines for this project is that you can use it to handle forms. Add a special tag to your HTML forms, and when Netlify builds your project, it will parse the tag and you can then POST your data to a Netlify endpoint. This will save your form data for you! Like magic. Check out more in the docs here.

Elm —We’ve written about Elm here a few times before and we’re very enamored with the language and what it brings to the table for web development. Elm combines a statically typed compile to JavaScript language with a framework-like set of opinions for how to build Single Page Applications that just works. Additionally, the community has been awesomely helpful, and the governance of the language is very deliberate and sensible. For some stats, Tuneup is around 1,000 lines of Elm code, and uses 6 external libraries. We also wanted to shout out the elm-webpack-starter project, which was very helpful in getting the app deployed to Netlify.

We’re super happy with our choices here and will probably use the same stack for future tools we’re already cooking up.

Why we built Tuneup

Mostly, we built Tuneup because it’s what we would tell ourselves if we hired ourselves as consultants. We know, deep stuff. Deep stuff.

Joking aside, what we mean is that when technology companies ask us the types of things they should build to “do content marketing,” we often suggest building a tool, for a number of reasons:

Also, now instead of pointing to the Hubspot Website Grader, which we’ve often pointed to as a benchmark lead generation tool, we can say, “Hey, check out Tuneup!”

Since we’re programmers and marketers who can write and execute a technical tool, we were comfortable with the risk involved in taking R&D time way from writing and applying it to some tool creation. We’ve been trying to do as much pricing work as we can, so we’re pretty happy with what we came up with in terms of creatively demonstrating our nuanced understanding of a niche but very valuable topic.

Results and lessons so far

So, how did we do? Not bad! We didn’t do too badly. We weren’t going for a giant splash because we started with a relatively narrowly focused tool, and this is our first time out with a product like this. Overall, we got a decent amount of traction through social channels, namely Twitter and LinkedIn. We’ve collected around 100 emails so far, 40 of which seem to be decent leads that we’ll be following up with in the next few weeks. Considering the volume we work at, this is pretty successful — our entire first year consisted of client work with less than 20 companies.

That’s all. Thanks for tuning in to our posts about Tuneup, and if you haven’t yet, give it a shot! We’d love to hear your thoughts.

*Full disclosure: Though we’re not actively engaged, Reify has done work for Netlify in the past.